HOW SMALL TRADE BUSINESSES, AKA, ‘THE LITTLE GUY’, CAN WIN!

The story goes that,

Goliath, a giant and the champion of the Philistines, challenged the Israelites to send out their champion and decide the outcome of their ongoing war in single combat.

None of the Israelites dared to face the fearsome behemoth…

He brought only a slingshot and a pouch full of stones, against Goliath’s sword and shield.

Then, as Goliath charged in for the kill, David found a vulnerable spot in his opponent’s armour and hit him there with one of his stones.

His precise throw hit Goliath in the head and knocked him out.

Allowing David to win the war for the Israelites. So, what does this tell us?

The underdog, aka, the ‘little guy’…

And this holds true for just about every single trade business too.

At first glance, Goliath might seem unbeatable (bigger and stronger than any man).

David, on the other hand, however, was quick and agile.

While he could not best Goliath in brute strength, his speed advantages allowed him to react to Goliath’s offensives, and then pivot into better positions.

Those are the same advantages small trade businesses have.

When they learn something about their marketing or sales process that needs to be corrected, they can quickly pivot and change it, without having to run it up the executive chain of command - and wait for the go ahead...

Reacting quickly and changing before their larger competitors.

If David had slung his stones all over the place in a rapid-fire but willy-nilly fashion, he would not have been able to nail Goliath’s vulnerabilities.

One well-delivered stone was much more effective than firing off his entire pouch of ammo...

Sales and marketing processes in small trade businesses should be thought about in the exact same fashion.

Be more specific, direct and targeted! Be clear about who you’re targeting and why – have focus!

‘Spray-and-pray’ is not nearly as efficient or effective as precise targeting, so get clear.

The ‘rules’ as envisioned by Goliath and the Philistines dictated that a single champion from the Israelites would fight Goliath in hand-to-hand combat, where Goliath’s strength and skill would surely win out.

Any combatant fighting on his terms and under his rules stood no chance, right?

In fact, they would be foolish to.

What these small trade businesses should do, instead, is look for ways to disrupt the status quo and do things in a different way.

Find your point of differences – and exploit the shit out of them!

Reason #4: Live on the cutting-edge of efficiency

A lot of these different ways usually centre around technology, which can be the great equalizer.

Cutting-edge technology can do a great job of levelling out the playing field.

David certainly knew this, bringing in the slingshot to give him range and precision, at a time when the popular weapon of choice was the more close-ranged sword and shield.

Identify key points of leverage in your business, streamline your processes, leverage the right tech. and make sure that you are lean, mean and nasty – be as efficient as humanly possible!

Be ahead of your competitors! Fighting against larger and more established competitors who seemingly have all the advantages of strength, size and resources.

This means that you’re going to have to think outside the box and use your own built-in advantages to compete.

By learning from the classic story of David vs. Goliath, you just might be able to deliver that killer knockout blow in your market...

If you're an electrician, plumber, painter, carpenter, or any other trade business owner who is looking to take your business to the next level, click here to learn more about how our team can help! 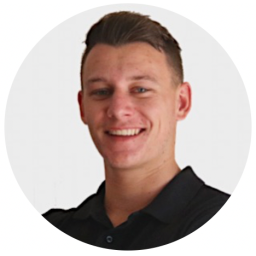 Growing up in a family full of tradesman and accountants with a business savvy father, my childhood involved heavy machinery, dirty overalls and years of hand’s on insight into the family business. Being fast paced and dynamic in...